The store will not work correctly in the case when cookies are disabled.

A few years ago I noticed a leaning by some members of our club towards Benchrest Shooting.
Certain club stalwarts threw their arms up in horror and you could hear them wailing and lamenting throughout the club such statements as ”that's not a real sport”, “that's easy”, “no skill there, anyone can do that”.
Of course, some of the things they said were true; it is easy, and anyone can do it, however, not everyone can do it accurately and consistently. It's not as easy as it looks but like most shooting sports Benchrest is open to people of all ages, gender and physical abilities.

One particular prone shooter at our club took great delight in telling me - and anyone else within earshot - that I was only shooting Benchrest because it was easy and that I was getting on in my years (ironically he’s about 5 years older than me).
Yep, I agree with both of those statements.
I AM knocking on a bit and it IS easy to take part but in order to progress and improve like any sporting discipline, it takes time and dedication.
Having said that, there are competitions for people at all levels so you can start competitions pretty much from the word go.

For me, Benchrest shooting is the perfect shooting discipline.
For one thing, I no longer need to squeeze my more than ample figure into a prone jacket that frankly was too tight ten years ago when I bought it and I don’t have to plop my rotund carcass down on a hard floor and struggle to get up again with all the grace of a beached sea lion with gout. 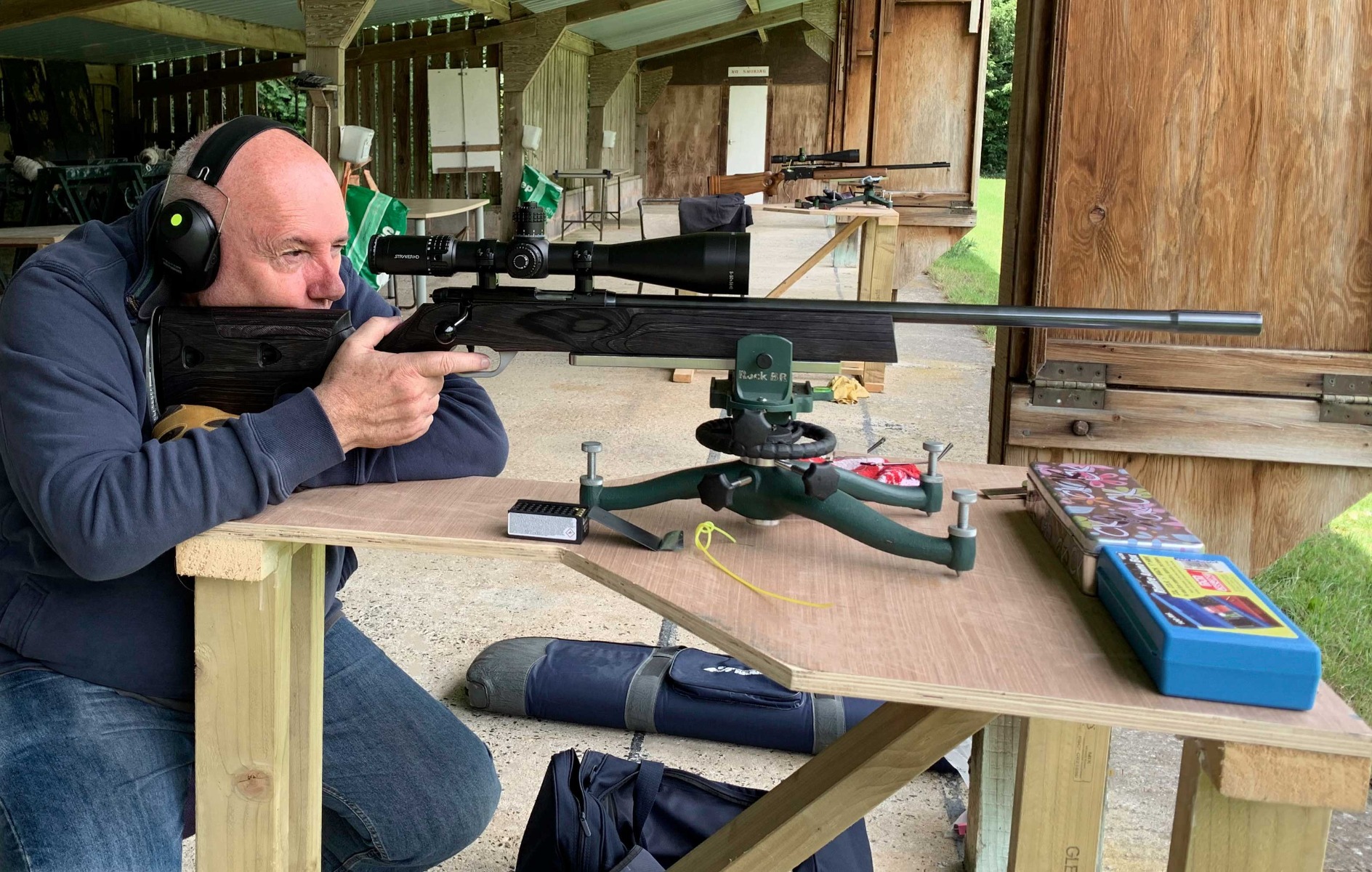 I've been shooting on-and-off for over two-thirds of my life but only in the last fifteen years or so as a Target Shooter.
As much as I love to shoot and compete its fair to say that I'm not a natural and have had to work hard for any modest (and I mean modest) success.
I have won a few competitions in LSR Sport Rifle (in the lower classes) and once was in the team that came first in the Devon Air Pistol Championships, which was a surprise to me as no one told me that id been entered, still, somewhere I have a little medal to that effect.

I started Benchrest because I needed something to replace Prone Shooting when I developed a problem with my back that caused me to go into mild spasm when I laid down.
Apart from being uncomfortable, I decided that someone twitching on the floor for two minutes with a loaded Rifle was not the best idea since the loaf of many slices.
At first, I was skeptical as I was put off by the proaners (my word made from prone and moaners) but I had a few go’s and within a few weeks, I was hooked.
I have made reasonable progress in Benchrest over the last few seasons.
I've won a few open competitions, missed out on club championship last season by one point (always the bridesmaid), and have managed (by way of bribery) to get myself into the Devon team.

So, how do you get started and what do you need?

Well for the sake of this writing we will assume you are already a member of a club although if you have land that you can shoot on and the relevant equipment you can do it anywhere.
For now, let's stick to club shooting and competition.

Most clubs will have a selection of guns and equipment for most disciplines.
For Benchrest you will need a Rifle (usually bolt action single shot .22LR fitted with a fairly powerful scope) a solid bench, a rest of some description, and a stool.
Most people shoot Benchrest with a .22LR Rifle but you can compete competitively with a good quality Air Rifle ruling out the need for a firearms license.

You will need ear defenders of some sort and accessories you might find useful are Shooting Gloves and an ammunition box.
Other than that no other specialist clothing is required, just whatever you feel comfortable in (try to avoid a smoking jacket or silk dressing gown though). 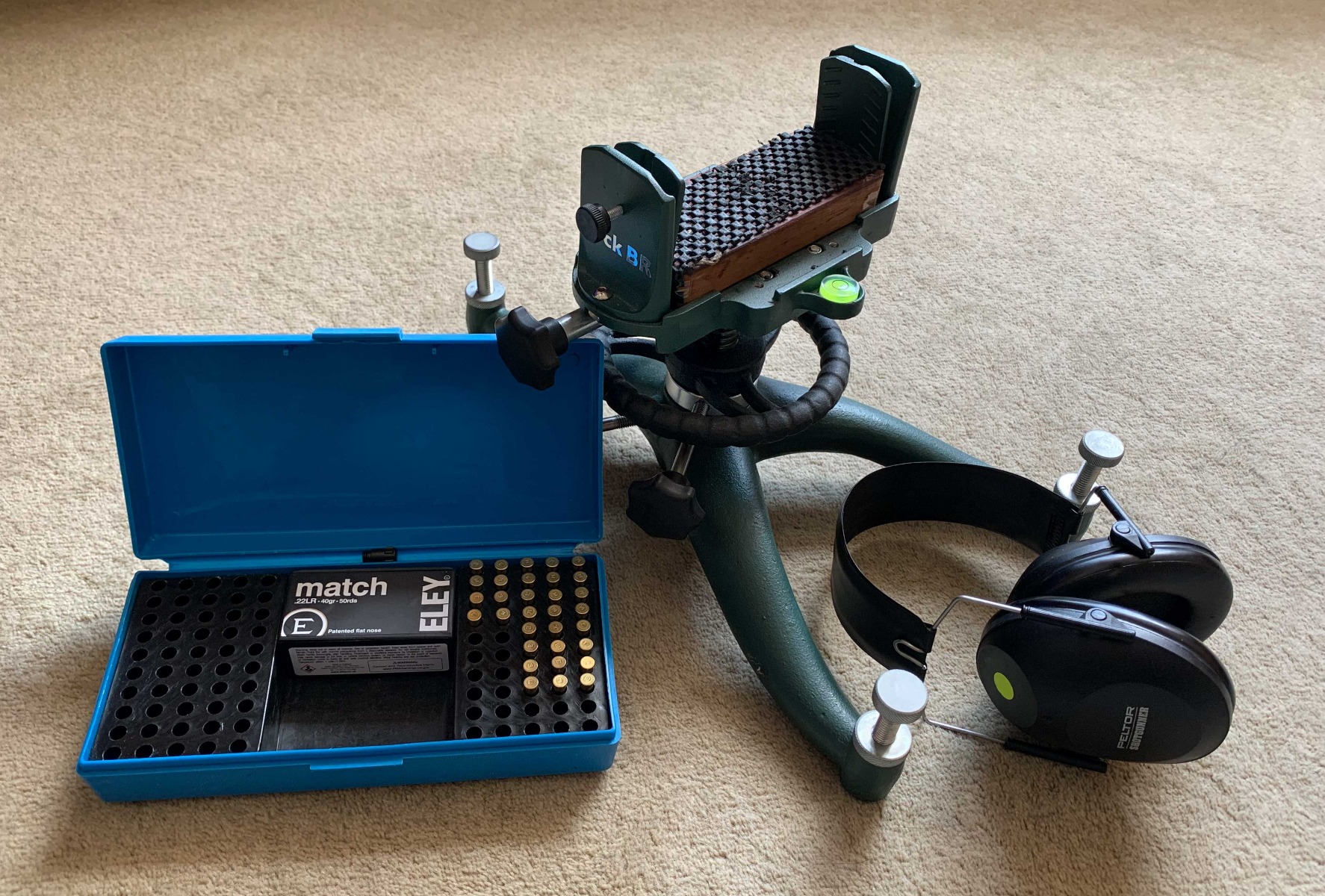 If you take a look around at the Rifles people are using at your club you will probably see several different types and makes.
Our club bench rifles are mostly Anschutz but there are other good quality brands such as Walther and Feinwerkbau.
Most of our Benchrest guns are old prone rifles that have had the stocks modified in some way to allow then to sit securely on the rest.
Some of them have high power scopes but my advice would be when starting out is to try as many different options as you can to see what suits you.
Some folks (like me) prefer a heavy rifle with a powerful scope with the weight of the gun evenly distributed and others prefer the lighter options.
Talk to people at the club, see what they shoot with and if you’re lucky they may let you try it out.
I always let people starting out to have a go with my rifle as long as I know they are safe and will treat my things with respect.
Remember when someone offers you the chance to borrow something its a privilege so you should take as much care (or more) as you would if it was your own.

Once you’ve been going for a while and have experienced different guns and scopes etc you might consider buying your own kit.
It can be a pain when you have to rely on club equipment as you have to hope that your favourite rifle is available and sighted in for you plus you do get through more ammunition making sure it shoots at least somewhere near where you are aiming.

If you are going to apply for a license and purchase your own equipment there are several things to remember.

Firstly, you will HAVE to adhere to the letter of the law in order to acquire firearms and keep them at the club or at home.
There is lots of information on the net which explains all that you need to do and how to go about it.

Tips for your first purchase when it comes to Benchrest Shooting

Don't rush into things!
Take your time and shop about.
Sometimes there are people at your club (and other local clubs) that are trading up or retiring. Ask around, you never know whats sat at the back of someone's locker just waiting for a new home.
Remember!! A Rifle is for life, not just for Christmas.
Some new Target rifles are seriously expensive but if you have the means and you're really keen then there's no reason not to indulge but remember, an old accurate rifle will still be accurate even with the scratches and scuffs as long as you have the ability to point it in the right direction.

My first Benchrest rifle came from a trade fair at Bisley (our national shooting centre in Surrey).
It was made in 1967 and the stock was scratched and scuffed but the actual gun was in good condition.
It cost me £180.
I sanded and refinished the stock, made some rear weights to make it heavier and added a flat steel plate for more weight and balance.
I managed to sell the set of old sights that came with it on eBay (other auction sites are available) for £60 so that made my Rifle come out at £120: a real bargain when you consider that a new rifle with a Benchrest stock would be around ten times as much. 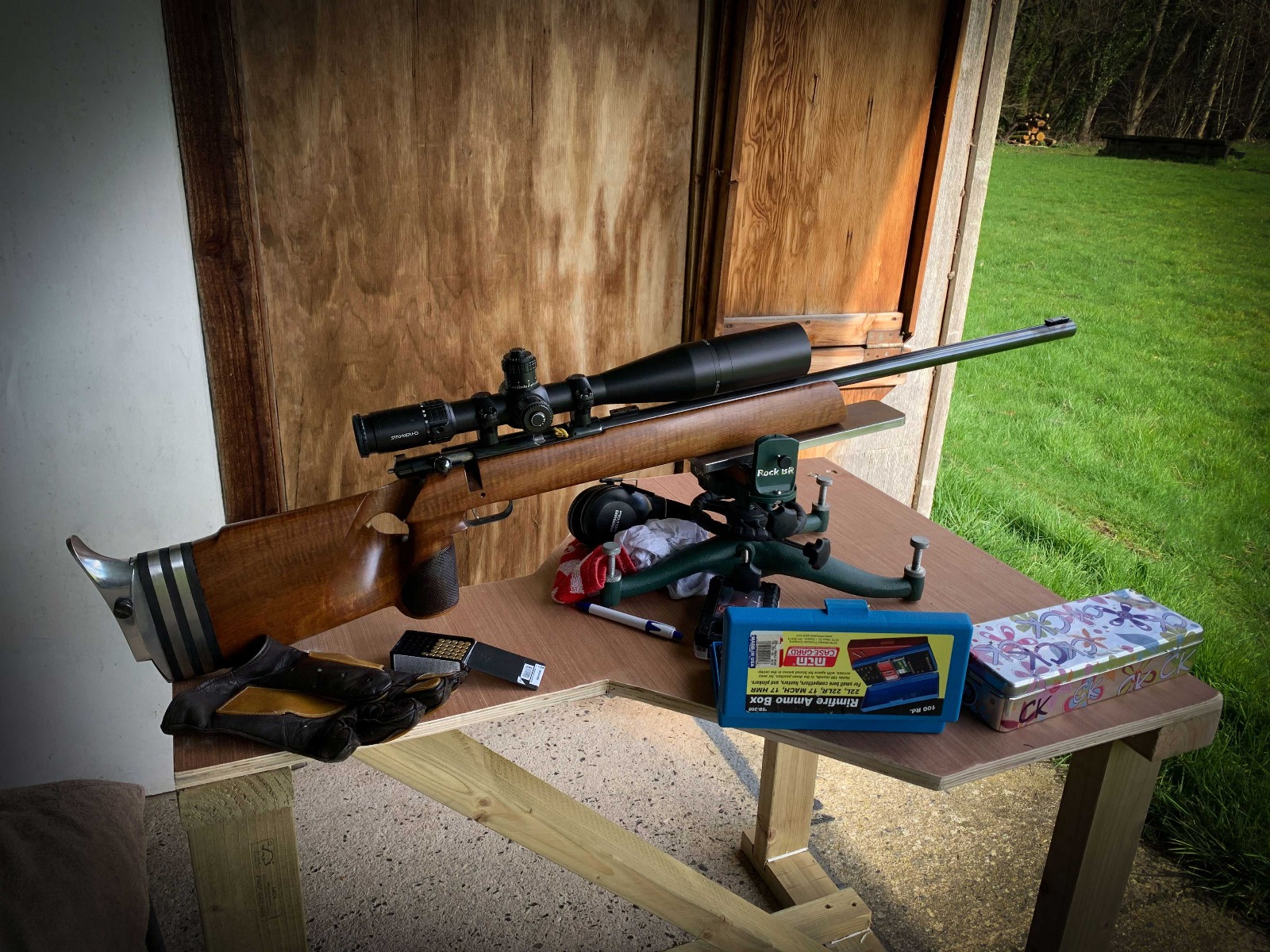 Once you have your rifle you will need a scope and this is where it becomes more tricky.

Optics are a very personal thing in my opinion.
A good scope can be the difference between winning and losing.
A scope needs to be fit for purpose, it needs to let in a good amount of light, needs to be able to focus down to the minimum distance that you will be shooting at and should be clear and bright.
One of my other pastimes is photography and when I first started out I realised that you could have a fairly expensive camera body but if you added a cheap lens your pictures will be soft and unsharp.
Use a cheap camera body with an expensive lens however and the results are quite different.
Optics are key in my opinion to good pictures and good shooting scores.
Optics Warehouse has a great selection of scopes for most types of shooting. They often review scopes on their Youtube channel and are happy to advise on what they consider the best value for your budget and of course they also stock most of the other things that you will need, ie, Shooting Rests, Ammo Boxes, etc at pretty much the best prices around.
(Right lads, that's a fiver you owe me!)

So a quick summary

Try things out, don’t rush to buy unless it's the smaller things like Ear Defenders, Gloves, Ammo Boxes etc. they’re comparatively cheap and you won’t have to replace them at a later date.

If you have limited money buy preowned equipment, especially the Rifle.

New optics are a better investment.

Clearer, sharper and brighter make for higher scores and if you spend all day at a competition, a good scope is less likely to give you eyestrain.

Once you’ve been shooting for a few weeks and feel that you are making good progress then ask some of the other shooters for advice and tips, most people are only too happy to help (unless you start to shoot better than they do).

Try new things, you can always go back if they don’t work out

Lastly, when you are ready and feel the need to acquire your own kit give the lads at Optics Warehouse a call.
They stock most of the things you will need and at very keen prices.
They will be happy to help and advise and to be honest, most of them are sat around doing nothing for most of the day so they will be only too happy to have someone to chat with………… 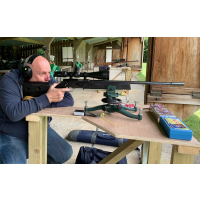 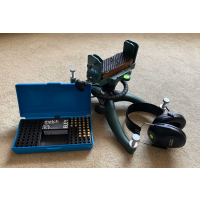 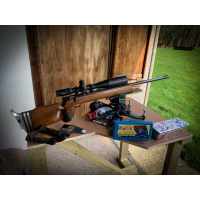